You are here: Home / Archives for red wine 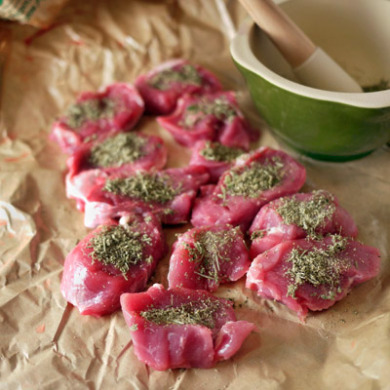 In cold weather, braised meat or a meat dish with accompanying sauce is the perfect choice, and this pork tenderloin recipe makes impressing your family or dinner date incredibly simple. Pork tenderloin is the most tender part of the animal — which makes your job easier — and I had the butcher at my local organic market cut it into 1/2-inch slices. Then just follow the recipe; prep time is 10 minutes and cooking time is 15 minutes. This recipe makes even a complete beginner look good! And, it’s easy to pair with wine (see below).

COMBINE garlic salt, rosemary, thyme and black pepper in small bowl. Sprinkle pork with half of spice mixture as shown above.

HEAT oil in large, nonstick skillet over medium heat. Add pork and cook on each side for 3 minutes or until browned and cooked through. Remove from skillet; set aside and keep warm.

REDUCE heat to low. Add flour, evaporated milk and remaining spice mixture to skillet. Stir to loosen brown bits from bottom of skillet. Cook for 3 minutes. Add grapes and cook for an additional minute until thickened.

PLACE pork on serving platter and top with sauce.

I am a Pinot Noir lover, which goes well with pork and works fine for this recipe. But to take the flavors up a notch, I paired it with a Rhone Red Blend. This is usually based on three grapes, Grenache, Syrah and Mourvedre (also known as a GSM) but can sometimes include other Rhone varietals. These blends are typically described as having blackberry, leather and pepper notes, and go well with juicy, gamey meats as well as French-style spice blends, especially rosemary.

There’s at least one winery in every state, but that doesn’t mean you should taste the local wine when you’re driving through Oklahoma.

But in North Carolina, they’ve been slowly converting tobacco crops to grape vines over the last 10 years, thanks in part to an incentive by the state government to do so. In this state, the wines go gloriously with the local gourmet cuisine. You can find gourmet food and wine in North Carolina’s Yadkin Valley.

Yes, I found some lovely things to eat in the boonies of North Carolina. One place was Twenty One & Main in Elkin, a bistro serving up some incredibly tasty lunches and dinners in these here parts. On this day, the lunch special was a salmon tartare sandwich, with edamame paste, grilled pineapple, and wasabi cabbage, shown above. And it pairs perfectly with a crisp, white Italian wine from Raffaldini vineyards.

The next night for dinner, my hosts served me another local wine (or was it cider?) on the deck as the sun was setting over 12 acres of green crops and wooded fields. Then they proceeded to fix a grilled romaine salad, with a chipotle-caesar dressing, alongside grilled beef and buffalo with a Cabernet reduction sauce.

But the best thing I ate in the North Carolina countryside was fried okra straws, with produce picked straight from the garden just moments before. I never liked okra as a child…it seemed like everyone in the Midwest breaded and fried okra the exact same way and then smothered it with ketchup. It’s one of the worst things I’ve ever eaten.

But these were glorious. My hosts sliced them thinly, lengthwise, to look like straws. Then, they dipped them in spicy corn meal mix, and flash fried them in a deep fryer.

These spicy fried okra straws were the best okra I’d ever eaten! I never thought someone could fix okra for me that I actually liked! And now it was fixed…along with the best summer evening, in the woods, on a deck, I’d had in a long, long time.

Rioja Spain is a red wine heaven full of Tempranillo. This lovely, russet-colored, medium-bodied varietal excels in all renditions here in its homeland of Spain’s oldest wine region.

The Spanish have a foolproof way of guaranteeing what the drinker will get in the glass…at least as far as time in the barrel and time in the bottle. Something the Spanish seem to have more of than its New World Counterparts: time.

The only wine released early here is vino joven, or young wine, which is the daily drinking wine at the tapas bars and at most dinner tables. This wine has only been through basic fermentation, then barreled or bottled for immediate drinking to local restaurants, bars and their own front-of-the-house shops, so locals can fill their own bottles bound for home.

The next youngest red wine is Crianza, which must be aged for 2 years, with at least 6 months in oak. This is the basic level of wine in Rioja, and has spent more time in the barrel and bottle more than many California wines ever do. If you love Tempranillo, this is a wine to try.

Reservas and Gran Reservas have spent even more time in barrel and bottle, but the Crianza has a special place in my heart (along with all the jamón ibérico). It has smoothness, hints of cherry and herb, with a fresh roundness to the palate and an elegance of acid and earth.

In Spain, it’s accessible everywhere at great prices and goes with everything you’re gonna eat. Rioja Crianza: what more can a girl want? On my recent trip to Spain, I got to eat at the world famous Asador Etxebarri (Anthony Bourdain’s best meal of his life – and mine now too) in the middle of Basque country in Spain. Home of the world’s Grill Master Victor Arguinzoniz, he’s known for cooking with fire over coals and wood, and pairing different foods with the correct type of coal or wood that suits it best. He even makes his own coal.

And the 7-course tasting menu was indeed out of this world!

But one more thing that impressed me was the very accessible wine list. The prices were really reasonable (less than some of the food!), making it easy to order a bottle – not a glass – of local white to go with the many varied seafood dishes and a bottle of Rioja red (made mostly from the Tempranillo grape) to go with the meatier ones. Since lunch would be a 4-hour affair, we had time to take the wine all in.

The white we ordered was a local grape called Txakolina shown above, from Itsas Mendi which means “sea and mountain” in Basque. The Basque make Txakolina in flat and sparkling varieties, and drink it with everyday meals in their homes. This flat Txakolina was lively, a bit lemony and briny. It’s made from a local grape called Hondarrabi Zuri, grown and bottled overlooking the bay near Bilbao. A bit wild and windy, perfect for the Grill Master’s typical meals and seafood dishes.

For the meat dishes, we chose an affordable Rioja 2007 Crianza from Fernández de Piérola. La Rioja is just an hour’s drive or so from here, and remains the locals’ wine of choice for nicer bottles with dinner. What I love about Rioja wine is how the laws about grape quality and specific requirements for time in barrel and in bottle assure the drinker of how the wine will taste. I love the youthfulness of Crianza over Riserva and Gran Riserva for pairing with various meat dishes – it’s a pretty versatile wine. This wine was elegant in the background of the food’s main stage, complementing without being too brash.

Wines were perfect and food was plentiful in our day of eating at Etxebarri. Now all we had left to do was nap.