You are here: Home / Archives for Cooking Light

The June issue of Cooking Light features a recipe makeover for that refreshing summertime treat: Low Fat Piña Coladas, shown above (photos by Randy Mayor, recipe and content by Cooking Light). They use Carnation evaporated milk to help lower fat but keep the creamy flavor:

“You’ll like our way of losing almost all the sat fat while keeping the delicious coconutty goodness. Freezing the pineapple adds a velvety texture and keeps the cocktail frozen longer. The riper the pineapple, the more concentrated the flavor will be.”

Sounds good to us! Excerpt below is from June 2012 issue of Cooking Light.

Nothing says “escape” like a creamy, ice-cold piña colada: cocktail in hand, feet in the sand, music in the background (hopefully not that dreadful piña colada song, the last #1 hit of the 1970s, unless it’s a guilty pleasure). Unfortunately, nothing says “better head to the gym” like a piña colada, too: 425 calories, 8 grams of saturated fat, most of which comes from the mysterious goo known as cream of coconut. We’ll show you how we kept the vacation-worthy flavor while slashing fat and calories. At just 158 calories, it’s all pleasure, no guilt.

We make our own infused coconut milk to replace heavy, sugary cream of coconut. This cuts 176 calories and 8 grams of sat fat per drink. Save day-of prep time by doing this step (step 1) the night before.

Pineapple peaks in summer; it’s sweet, slightly tart, and juicy. Sub fresh fruit for some of the canned juice and save 44 calories per drink. A splash of juice adds more acidity.

We opted for the darker variety, with its hints of caramel and molasses, which better complement the creamy coconut and tart pineapple.

Freezing the pineapple adds a velvety texture and keeps the cocktail frozen longer. The riper the pineapple, the more concentrated the flavor will be. Get the recipe here. 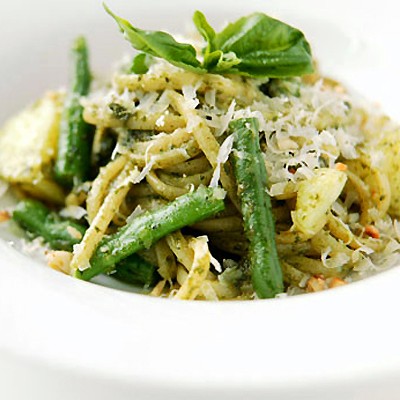 I love to try to incorporate as many vegetables as possible into my meals – after all, how many of us actually get the recommended dose of veggies at each meal? So when I found out about National Linguine Day, I decided to find some linguine + vegetable recipes, and also try pairing wine with them.

Well, I found 2 great recipes – super easy version and look-like-a-chef version – plus 1 great wine to go with them both. Both recipes use one of my favorite vegetables, artichoke, which is a difficult food to pair with wine, but what wine goes with artichoke, pesto, green beans and lemon? I found the winning varietal…read below to find out!

You need a wine with high acidity to pair with artichokes and something from Italy to match the food style. And a white wine since it’s a late summer dinner, pretty light with green vegetables and plenty of freshness. A Verdicchio is perfect for this! It’s crisp and snappy, matching the acidity of the artichokes and lemon, and creating some summer sizzle in your mouth. A last hurrah to the sun.