Fall is not the time for a new beginning, but I desperately needed one. The last few months were all about endings: the Hollywood Bowl season was over, my latest relationship crashed and burned as well as daylight savings time (signifying the real end of summer in LA). No more outdoor symphony, no more romance, no more light.

So when the third Thursday of November rolled around, I headed over to Silverlake Wine to taste the 2009 Beaujolais Nouveau. After having aged just 6-8 weeks in the barrel, this 100% gamay wine is released from Beaujolais, France on this specific day each year. It’s meant to be drunk now, fresh from the vine to the barrel to you, the way French peasants have been drinking it for generations.

The tasting went from lightest (pleasing, but not enough body for a new beginning), to fruity (too aspirational) to earthy (grounded, yet fresh and interesting). This Joseph Drouhin (who’s mostly a producer of Burgundy, my favorite!) Beaujolais was perfect. Just in time for harvest feasts, new friends, new beginnings.

I see a light, at the end of the bottle. 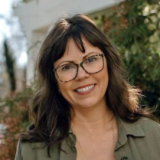